The tour of Europe

In the route planning stage we took a car map to see what kind of landscape we could expect on the way and sketched the route from Rotterdam (we took the Hull-Rotterdam ferry crossing from the UK).

The ferry arrived in Rotterdam at 9.00 in the morning and it's only an hour ride to Amsterdam city centre. Our intention was to have a short break there and make it a proper starting point of our motorcycle tour. There was plenty of time to our first night stop so we could easily kill a few hours in Amsterdam. The city was brilliant and rather busy that time, in preparation for the tall ship races event. The atmosphere of this place was magical and the weather was good too. 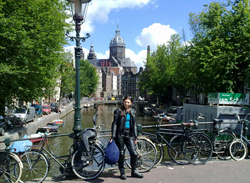 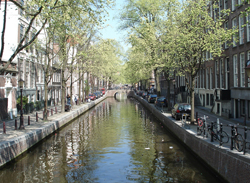 Amsterdam brought back some old memories, as we went there as students, plus our dog, years ago. We were just taking the double selfie, when the dog jumped into the water behind us (he could not help it, just loved water too much). This made us panic a little as it wasn't easy to pull him out! See the size of this beast! 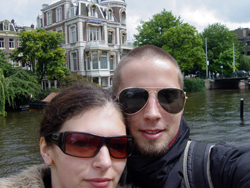 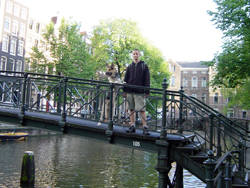 Back to the tour..

Having spent a good few hours in Amsterdam (we only intended a couple) it was time to say goodbye to the city and crack on with the journey.

The first part of this was mainly motorways. The scenery was hardly breath-taking, perhaps the flattest part of the world I've even been to. We steadily made progress south-west through Netherlands and Belgium and after four hours riding time, we crossed the French border. We arrived at a lovely camping ground (Camping de Sorel), approximately 60 miles North-East of Paris. The camping was rather a family orientated holiday spot but that did not matter as we only stayed for one night. Happy at the refreshing country side, we were both pretty excited and looking forward to the next day.

The next morning we packed up quickly and off we went. The one hour journey to Paris was meant to be an easy ride but it was almost a nerve wrecking exercise with so many careless drivers around. Our budget hotel was on the outskirts of Paris but it was ideal for arrival and departure the following morning. The hotel had an underground garage, so it felt luxurious and safe to leave the bike behind. We got to the city centre by the Paris metro, very convenient. 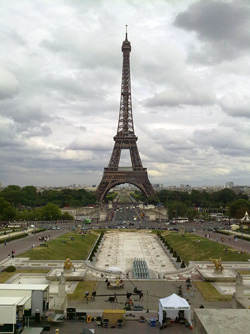 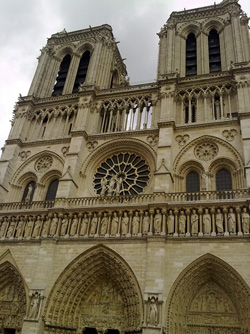 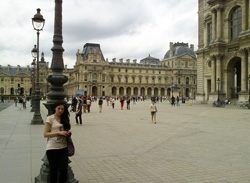 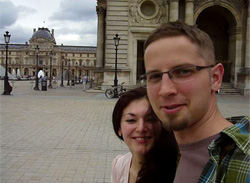 Yes, we have seen the Mona Lisa too but who knows if it was the original ...LOL 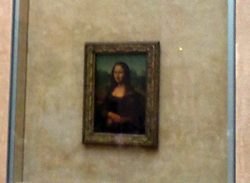 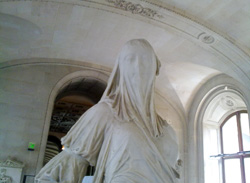 I actually liked this one more.. 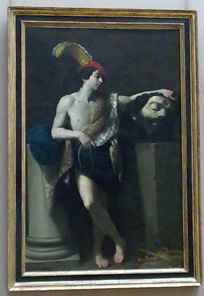 The next day, after a nice breakfast, we continued south towards viaduct Millau, another 4-5 hours of riding. In the first hours that day, we tried to stay mainly on motorways but we often took a detour to avoid the tolls. This gave us a chance to see the small French towns, which we found very peculiar. Most of them looked as if nobody was living there. Streets were empty, there was just nobody there. Like ghost towns, interesting but a creepy experience, you start to wonder if they knew something that we didn't? 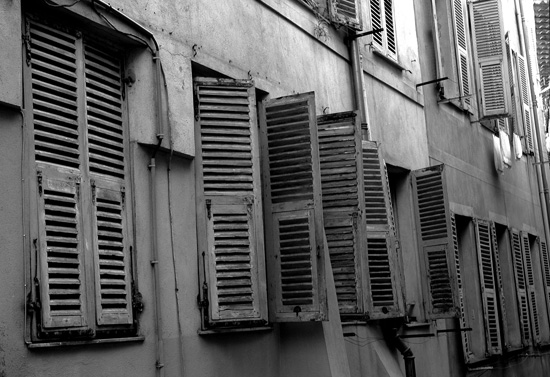 Anyway, these roads seemed to slow us down a bit so we were back on motorways, luckily not too many tolls in the last part of the day's riding. The last hour or so was perhaps the fastest part of the tour, flying along the A75. This motorway has one of the most impressive bridges with spectacular views. It felt like flying an aeroplane through the mountains. A guy on a Honda Blackbird had joined us for some time, dressed as if he came out of a gym (trainers etc.) but was flying along with us at around 100miles/hour.

With a big smile on my (and little horror on her) face we landed at a small camping ground situated in a beautiful valley, not far from the viaduct Millau. It was just what we needed after a day of riding. The place had fantastic views and a calming sound of the La Dourbie river. That night the sound made us sleep like babies. 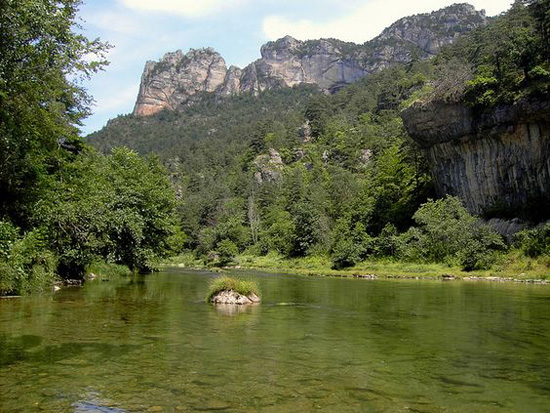 The campsite atmosphere was very friendly and slow in the morning. We liked this pace and the calm character of everything around. The only thing that might have urged us that morning was the thought of seeing the viaduct Millau. We thought that another night at this campsite would be wonderful. In fact, we could have spent the entire holidays there, obviously if we didn't have the motorcycle.

So off we went, just before noon, heading to see one of the greatest engineering achievements of all time and the tallest bridge in the world. 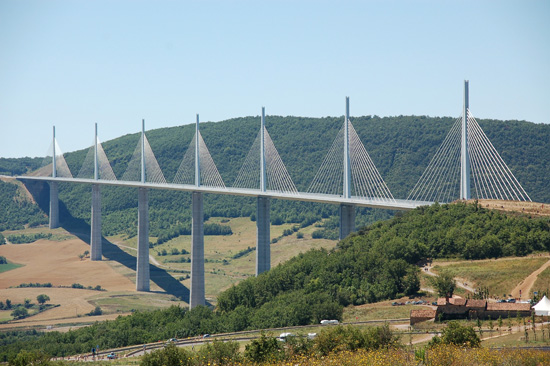 It is an experience on its own just to see this massive structure. Riding along it does not give you this 'aeroplane' feeling as other more open view bridges along the A75 route.

The next destination - Barcelona

That was the first of the hot days we had but also very enjoyable, with many twisty roads and scenery of a dream motorcycle tour, especially the part through the Pyrenees. We had chosen the D914 route on the French side and continued on N260 and then on N11 in Spain. This offered stunning views and fun rides on twisty roads. The weather was perfect. At those temperatures and with clear tarmac the feel from the Bridgestone BT-021 was excellent. It was a good test for them on those roads with the loaded bike. I was very happy to have put them as they did perform very well.

Soon after crossing the Spanish border the temperatures were so ‘good’ that we had to make one longer break on the beach just to cool down in the Mediterranean Sea.

Not long after that we stopped for a night of wild (camping). This was just a couple of hours from Barcelona, so the following day we were to arrive early in our hotel for a day of rest and sightseeing. I remember it took us some time to find the wild place, and at the end it wasn't ideal. From the time perspective, I think we could have planned it better with the use of Google Earth. And so we've learned something there.

The hotel was perfect though. What a nice change, after hot days of riding an air-conditioned room was so much appreciated! After a quick shower and lunch at the hotel out we went to catch a bus to the city centre. The public transport was well-organized with so many options available to get us to the city centre and back. The food was excellent too. We sat in one of the restaurants not far from the Basilica of the Sagrada Familia to have lovely seafood 'Paella' which is a regional Valencian rice dish that originated in ancient times. No photos of this dish on my plate though, perhaps I'm not that kind of photographer. 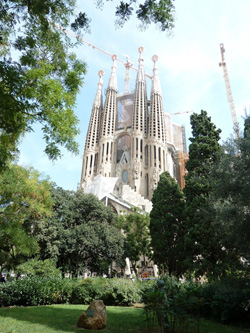 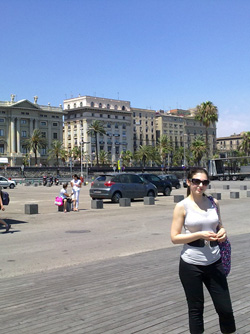 That day in Barcelona was pleasant but busy for us. The breeze from the sea helped with the heat so we could keep on moving. If you ask me I could spend a day on the beach but there were just too many things we wanted to see in the city in one day. All in all we came back to the hotel rather exhausted.

For the next day I had a pretty good idea of what we needed, which was: not much riding, all I wanted was a nice quiet beach and the 'doing nothing' mode for a good part of a day.

A day on the beach

The Camping Eucaliptus, only a couple of hours from Barcelona, further down the East coast, seemed to be the best place for it. The campsite was only a 5 minute walk from the beach and had a pool as well. This was a perfect place to chill out. The owner had a Honda Goldwing and he had toured Europe before, so we had good company and plenty to talk about. 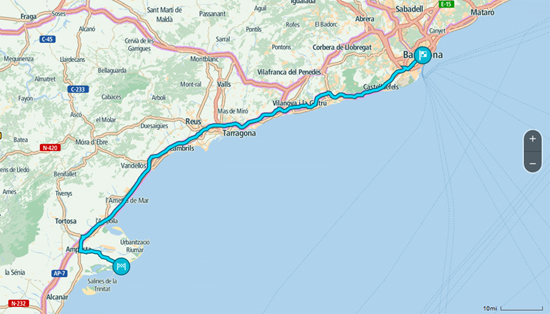 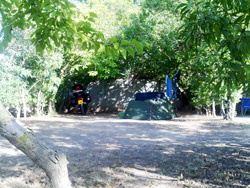 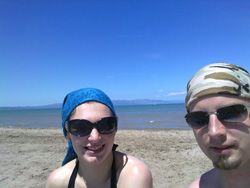 The following day we intended to reach Portugal. We got up early to set off for the longest ride we have ever done in one day. 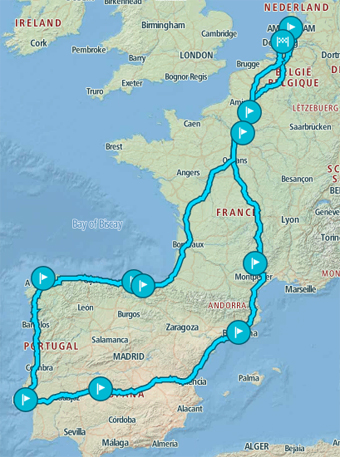 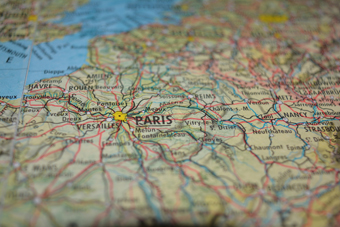 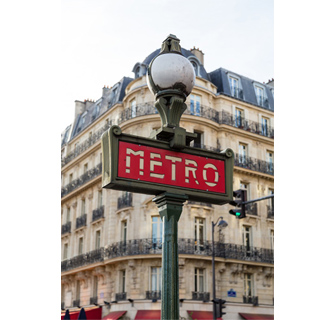